A place to discuss official news from the production of the Ender's Game film, due in theaters November 2013
Forum rules
Post Reply
12 posts • Page 1 of 1 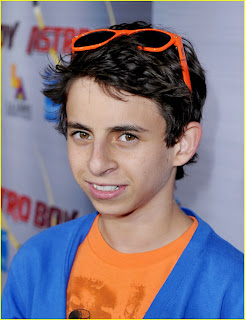 via Variety and Ender's Ansible.
Top

but at least he looks the part:)
"leaving both her husbands behind, the one whose life had a monument and a book, and the one whose only monument was in her heart."
Top

Yeah, it's going to be hard for me not to see him as his character in Hannah Montana.

Having not watched Hannah Montana ever, would he play a sociopathic jerk well?
Shell the unshellable, crawl the uncrawlible.

Having not watched Hannah Montana ever, would he play a sociopathic jerk well?

Pretty much this.
"But the conversation of the mind was truer than any language, and they knew each other better than they ever could have by use of mere sight and touch."
Top

Not that it's saying much, but he was probably the most talented actor on that show and I do think he has the skills/range to go with the undeniable energy he had in it. He played someone who was a bit...off, in a comedic way, but I bet he could swing it in the other direction.
Se paciente y duro; algún día este dolor te será útil.
Top

I've never seen Hannah Montana but I remember him from Nacho Libre. He was much younger and pretty cute. Not Bonzo-ish at the time but if he's a good actor, I'm hoping he can pull it off.
"In the depth of winter, I finally learned that within me there lay an invincible summer." - Albert Camus in Return to Tipasa
Top

At the very least, he's a fan or Ender's Game and he has a picture of himself reading Ender's Game. It's pretty cool!
"Even though faith is above reason, there can never be any real disagreement between faith and reason, since it is the same God who reveals the mysteries and infuses faith, and who has endowed the human mind with the light of reason." -The Catholic Church, Session III, Chapter IV, Canon 5 of the First Vatican Council
http://endersansible.com
Top

ok. i have a major problem with this cast. bonito means pretty or beautiful. he was described as a beautiful boy. this cat doesn't exactly fit the bill. just saying...
Top

ok. i have a major problem with this cast. bonito means pretty or beautiful. he was described as a beautiful boy. this cat doesn't exactly fit the bill. just saying...


Harsh...you may have the victory... But you'll never have his pride.
For a fortune he'd quit
But it's hard to admit
How it ends and begins
On his face is a map of the world
Top

ok. i have a major problem with this cast. bonito means pretty or beautiful. he was described as a beautiful boy. this cat doesn't exactly fit the bill. just saying...

To be fair, names are normally given to newborns, whom almost all parents describe as "beautiful."
Shell the unshellable, crawl the uncrawlible.

i hear you. i'm not saying the dude is ugly i'm just saying he doesn't strike me as fitting. if osc signed off on it, i guess it's legit but he did write the short in InterGalatic Medicine Show titled "Pretty Boy."
Top
Post Reply
12 posts • Page 1 of 1