Who Should Play Adult Roles?

Who Should Play Adult Roles?

by wigginboy
We have had much debate on this in the old pweb, but that is lost and i think we have new members. So, who should play the major adult roles in the movie? I was thinking Clint Eastwood for Mazer Rackham. He's old enough and seeems to fit the description of him in the book. Rough, leathery skin. It makes sense. As for Graff, we need a serious guy, who can have a sense of humour sometimes. I was thinking possibly MArk Addy but we run into the problem that he is a comedian so people might find it hard to take him seriously. As for Anderson, well, I heard on the old site that he was supposed to be a she in the movie, so I'll leave that one open for suggestion. I would love to hear anyone elses suggestions on adult roles too.
by Craig
I've always been a huge advocate of Morgan Freeman for Mazer. But then again, Sean Connery would be absolutely incredible. They are pretty interchangable to me to be the frontrunner for the role.

For Graff I have one person I want... I just watched Barton Fink again the other day and John Goodman never ceases to impress me. I love the guy and he fits the role to a "t". John Goodman is the ONLY option in my opinion.

As for Anderson, I want somebody younger with little experience. That being said, I couldn't really care less...

For Dap I want Nathon Fillion in what would be somewhat of a cameo.

Salaam
by Blitz
Hmm... the only one I can think of right off the bat would be Nathaniel Lees as Mazer. Or Morgan Freeman. But Nathaniel Lees first.
by locke
I've always thought Temuera Morrison looked the part more than anyone else since a fellow named caliginous suggested him back in fall/summer of 99 on the old fresco boards (damn it's been a while).

While Morgan Freeman would be nice, Denzel Washington could actually open the movie without forcing a rewrite of the script to make him the focus and give him an actiony scene. Will Smith could also open the movie but he'd force a rewrite to make the script have more Graff (note the idiotic and useless motorcycle bit in I Robot, totally a star ego rewrite sequence).

on the other hand the problem with both Morgan Freeman and Denzel Washington is that they bring so much dignity and gravitas that playing a hard nosed military man is either passe or stereotypical for them now, I don't think it'd be a role that would really draw their attention. That means it's a very hard sell for an agent and the casting director.

I'd like to see Joss Whedon take over the project, but I think if the planets align it will satisfy everyone's hopes and dreams with the heroic efforts being poured into the project for the last three years.
by Ithilien
I always thought that Hugo Weaving would make a fun Graff, humourous, serious, and sarcastic all at once!
by vendor
different idea... tell me what you think. how about brent spiner as graff
by Mich
Data as Graff.

Well... that's an interesting idea. I really don't know what to say.
by vendor
don't think of him as just Data. I thought he was great in ID4.
by Mich
I don't know, he kind of plays... "goofy" characters, am I incorrect? I don't think Graff is goofy. Graff is hard. Graff is cold. Graff is a giant a******. But, deep down, he loves his kids. Not quite goofy.
by Borommakot
I'm sure he could play a serious role if he wanted to. Is Anderson going to be in the movie? I'm trying to think of who could play him, and Dimik. What about Ender's parents? Would it be a good idea to cast great actors for roles that dont play a large part, such as his parents? But you sort of expect it, since they are kinda important. They'll play a larger role too if Card decides to make a movie about the Shadow saga, since I doubt he could have Speaker for the Dead and Hive Queen & The Hegemon in the same movie, so it would really be one or the other, most likely Speaker.
by Ted
Clint Eastwood for Mazer, good pick. I think Kris Kristofferson or Tom Skerritt could pull off Mazer, too. Scott Glen is a possibility.

As far as Graff, I could see Wilford Brimley filling that role.
by Jakt
Dig the Clint Eastwood pick for Mazer

The first thing that popped in my head for Graff was oddly.... Danny DeVito... wtf
by ThatOneGirl
I could see Liv Schreiber as an awesome Graff!!! He's got the perfect good/bad? guy thing going.

And as a preemptive disclaimer, I'm not a wolverine fan - I've liked him since before Defiance.
by HeatherDanger
Ok so Graff gets FAT. So no Hollywood hunks for him. I've always felt Alec Baldwin. Jaded enough, serious and already heavy set and worn looking

As for Mazer, I say Gary Oldman. That man can character act like a BEAST.
by Eaquae Legit
I guess I never posted in this topic. Huh. I still stand by Ben Kingsley for Mazer Rackham. He's amazing, wiry, tough, and a great actor.
by HeatherDanger

I guess I never posted in this topic. Huh. I still stand by Ben Kingsley for Mazer Rackham. He's amazing, wiry, tough, and a great actor.

Oh man. OHMAN. Kingsley. That would be incredible.
by Eaquae Legit
Woo hoo! In eight years, I've managed to convince somebody!

*does a little dance*
by Mich
You've pretty much convinced me, actually. That's the closest to my picture of Mazer that anyone has ever come.
by HeatherDanger
Though, let's be honest. Is there any role that Ben Kingsley wouldn't completely OWN. That GQMF.

by hkobb7
I have to say, I like the idea of Clint Eastwood, Morgan Freeman, or even perhaps Bruce Willis as Mazer Rackham. The Bruce Willis to which I refer is of the Hart's War variety, not the Live Free or Die Hard kind. Jean Reno would also be a good choice for this part, perhaps my first.

Graff is a more difficult selection. He has to wear more hats, so to speak, than Rackham, that of a nice man, a military officer (both hardened and softened), a teacher of children, and even at points a bureaucrat. The best insights into his persona, I feel, come in the introductory dialogues to each chapter, usually between Graff and Anderson or a superior.

That said, my first choice(s) would be Ed Izzard (a comedian, yes, but his performance as Erich Fellgeibel in Valkyrie was excellent, however minor). I think that the actor who takes this part needs to be extremely talented, but have a very small following. A Tom Cruise-type of person would distract from the main part of the film, in a way that would be ten times worse than John Travolta in Pelham 123 could ever be. Otherwise, I would consider Tom Hanks, Nicholas Cage, and other famous, talented actors for the part.

Anderson is much easier to cast, when compared to Graff. He's an officious, by-the-book, wargame-loving prick, who also likes his students, but not nearly as much as he loves the game (or as much as I like this run-on sentence). What I would advise against is changing the role for a female portrayal. It doesn't quite fit the persona of the Battle School itself, if that makes sense. I would look at Jonathon Rhys Myers and Tim Olyphant in this part.
by SpookyChris
[quote="ThatOneGirl"]I could see Liv Schreiber as an awesome Graff!!! He's got the perfect good/bad? guy thing going.
quote]

100% agree. he is the mental image i have when ever I read the books.

I could see Tom Hanks being Enders Dad. no clue for the Mom
by Psudo
How about Ben Kingsley for Razer Rackham, Bruce Willis as Graff, and Liv Schreiber as Major Anderson?
by Janus%TheDoorman
I'd sooner pick Russel Crowe for Graff than Bruce Willis. I can't think of any time I've seen Bruce Willis pull off the sort of subtle manipulations that are a big part of Graff and Ender's relationship. In Body of Lies, though Crowe practically is Graff. For some reason my image of Mazer has basically been this: 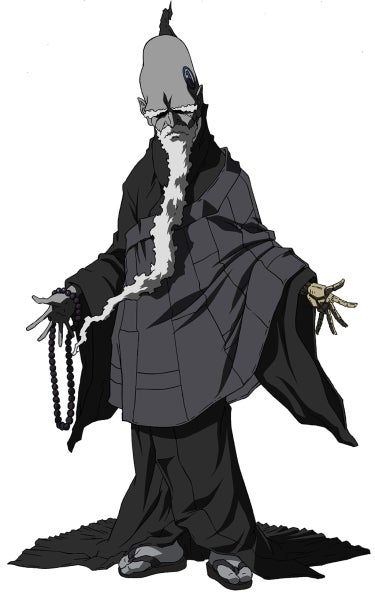 Ian McKellen would probably be my first choice, and Morgan Freeman after him. Freeman could play Mazer a couple different ways, though, and I'm not 100% sure all of them would go well.

Frankly, I'd like to see John Paul and Theresa played as almost comic relief characters, done right that would both make them obvious as the straw men for Locke and Demosthenes without delving into extra expository discussion of the issue between Peter and Valentine, and also serve as a reflection of the true depths of their character since we the audience know that they know what their children are doing. I forget which sort of irony that is. Dramatic?

That said, and especially if Joss Whedon directed as was suggested earlier, Nathan Fillion and Olivia Williams would get my votes.

That said, and especially if Joss Whedon directed as was suggested earlier, Nathan Fillion and Olivia Williams would get my votes.

Nathan Fillion should be in it just for the hell of it. The Firefly/Ender crossover is rampant among fans. Using his voice in Halo was classic but this would top even that.

by Boothby
Nathan Fillion as the shuttle pilot taking Ender to Eros.

Too bad for me, though...I wanted that cameo!

by Bean_wannabe
Nathan Fillion should be in everything.

Neither are any of the other actors people have floated. But Kingsley is more of a chameleon than many actors, and could do the scrawny old man schtick.

But Kingsley is more of a chameleon than many actors ...

That's it! A chameleon! We need Gary Oldman.

That's it! A chameleon! We need Gary Oldman.

You say many awesome things but this is among the best.

by Mich
My brother just sent me this, which reads as more than just random speculation, so it might be news-board-worthy, but eh.

Not sure how I feel about Ford. I love him, but he's not how I really picture Graff.

by Eaquae Legit
I can see Ford. Not my first choice, but a decent one for the crusty old soldier.