From Kristine Card over at Hatrack:

"OSC and Aaron Johnston have collaborated on the Formic Wars comics and novels. The first novel [Earth Unaware] is based on the story of the comics -- but greatly expanded. OSC is also in the process of finishing Rasputin with Kathryn Kidd." 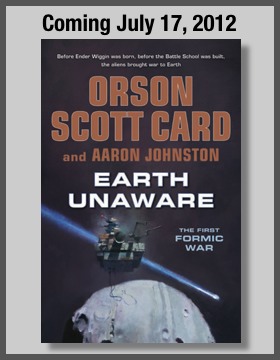 It has a page over at Amazon: Earth Unaware: The First Formic War, by Orson Scott Card and Aaron Johnston.

Out July 17.
According to a Tweet by Aaron Johnston, this is the first in a Series (First Formic War), not simply a stand-alone
Top

I'm always wary of co-authored books but I'm sure I'll read it eventually, like I did with that other one of his, which I can't even remember the name of.
"In the depth of winter, I finally learned that within me there lay an invincible summer." - Albert Camus in Return to Tipasa
Top

The First Chapter of Earth Unaware is now online at Tor.
Top

cool. looks interesting... I'll give it a read and hope it holds up.

Share this dragon - If you do - Lucky end - For them and you! Petra
Top

So, should we get "Bugger Off: The Anti-Formic Spray"?
Top

Alright, with the book about to come out, I've turned this into the official thread for NON-SPOILER discussions. Feel free to discuss your joy at receiving your copy, or other thoughts and whatever about the book here, but leave the spoilers for EARTH UNAWARE [ The SPOILER Thread]. Thanks!
Top

My copy arrived from Amazon today!

Hooray! I don't think this is a spoiler but I found it was pretty similar to the comics, which I knew going in, which is to say, I enjoyed it and cannot wait for the next one (where I suspect it gets much more action-intense).
Se paciente y duro; algún día este dolor te será útil.
Top

I got my copy late last night when I got off work. So excited to finish it!
Ahem, anyone care to write a review?
"Even though faith is above reason, there can never be any real disagreement between faith and reason, since it is the same God who reveals the mysteries and infuses faith, and who has endowed the human mind with the light of reason." -The Catholic Church, Session III, Chapter IV, Canon 5 of the First Vatican Council
http://endersansible.com
Top

I really would but book reviews are not my forté. Reading through some of Dave's other comments and insights on the books, I'd say if anyone should do one, it's him. But I don't want to volunteer him, of course.

I'm about 100 pages in and so far I think it's pretty darn good. I'd go so far to say that it's my favorite Enderverse book written since "Ender's Shadow" but we'll see how the rest of it goes.

I think it had some slow parts but overall, it actually reminds me a bit of the Speaker series; there are also parallels, I think, between Victor and Miro. I won't say I think it's as deep, philosophically, or as strongly told but I do think it gets back to what I really felt was missing in the Shadow series: a real connection with and focus on characters. With the Shadow series, the characters were present and their cultures and lives were explored but it was almost as if they took a backseat to the politics and action, as though all of them were, well, puppets, manipulated for the sake of moving the story forward to the next bit of political intrigue and war.

Earth Unaware returns to the type of storytelling that makes you feel connected to the characters on a more personal level. You fear what they fear, are repulsed by the actions of the corporate world, are saddened by their losses, are touched by their kindness towards each other, and genuinely want to see them survive.

I'm nervous I'm going to look back on the story and find that it wasn't as strong as I thought it was, which is what happened for me for every Shadow book and all that came after.
Se paciente y duro; algún día este dolor te será útil.
Top

I have to say this has been a slow reading process for me, but I'm enjoying it. I'm about halfway in. Victor really does remind me so much of Miro. At first, I thought it was just because they both had an "incestuous" love (though it doesn't actually look like Victor and Alejandra were blood-related, right?), but now I also see some similarities in their personalities. I can't put my finger on it. I guess I'll come back when I'm finished with the book. It may be awhile, though.
We can shed our skins and swim into the darkened void beyond
We will dance among the world that orbit stars that aren't our sun
All the oxygen that trapped us in a carbon spider's web
Solar winds are whispering, you may hear the sirens of the dead.
Top

I'm always wary of co-authored books but I'm sure I'll read it eventually, like I did with that other one of his, which I can't even remember the name of.

I was initially terrified that I'd blown a good chunk of money on something that OSC may have had only token input, but I very quickly found many of the themes, lessons, and struggles that I've come to love about every Enderverse novel card has written. Definitely what I paid for.
For three years I had roses, and apologized to no one.
Top
Post Reply
15 posts • Page 1 of 1

Return to “EnderVerse Novels and Stories”

Users browsing this forum: No registered users and 4 guests