Talk about anything under the sun or stars - but keep it civil. This is where we really get to know each other. Everyone is welcome, and invited!
Forum rules
Post Reply
98 posts

I thought I'd be Rikku from Final Fantasy

I got creative and made my costume a couple weeks ago.

Hot! I was going to go as mario, but I wound up not going to the party tonight.

I'm planning to go as one of Barrett's Privateers for the swing club's halloween event. I'm not sure if I'll go as something else to the Centre for Medieval Studies's party.
Le coeur a ses raisons que la raison ne connait point.
~Blaise Pascal I'm going as a nurse. A cranky one, since I have clinicals from 6a to (realistically) 8p. Then I get to do paperwork until midnight.
Yay, I'm a llama again!
Top That is amazing! Seriously. My Halloween costumes never work to that greatness.

Rockin' the Velma. It's gonna be great.
"I seem to remember that when I was younger, overly sugared brats were sent down into the basement to fend for themselves, like Lord of the Flies."
Top 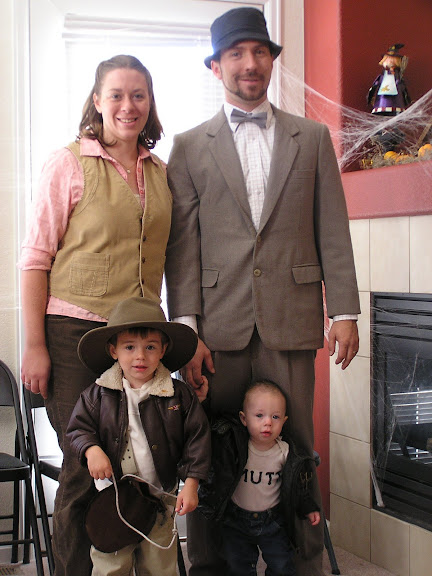 Which means I'm Marion, Brian is Henry Jones Sr. and Brayden is Mutt.
"When I look back on my ordinary, ordinary life,
I see so much magic, though I missed it at the time." - Jamie Cullum
Top

All of you guys and your awesome costumes. *jealous*

I haven't dressed up for at least three years. Haven't decorated in two years. I did, however, make pumpkin pie today and carve TWO pumpkins!

that doctor horrible costume is awesome.

oddly it occured to me on wednesday (as I was listening to the soundtrack again) that I should have done a doctor horrible costume this year.

I can even sing most of the songs.

Granted, my singing really is a horrible thing to inflict on people, which is just even more perfect.

And suddenly, my image of him as Hobbes-y and fuzzy is gone and replaced by Dr. Horrible.
Proud member of the Canadian Alliance.

Woo for murder mystery parties! Yours truly was a leader of a fake cult, "The Cult of the Blue Oyster". Also, I was not the killer, it was the lovely "lady" with his hand on his chest to my left.

Also, I am the one with the towel on his head, in case you didn't know. The costume called for a shawl.
Shell the unshellable, crawl the uncrawlible.

Jan, I hope you got some pics of you and Ginny together. I'd add Caspian but he doesn't go very well with the theme, I don't think. But his costume is awesome.

Steph, I'm seriously impressed over here (and your boys, all three, are adorable) but I'm not surprised. You guys have always had some pretty cool costumes.

I think I have a thing for tilting my camera when I'm taking full body pics of myself. Meh. Can't really see my halo in this shot but I'm supposed to be an angel. Oh, ignore the bad hair, too.

you look great in your costume, Alea. Love the dr. jones theme, Steph, those costumes rock.

Here's me as a flower with Ginny as a bee: What Paul didn't know when he dressed up as Dr. Horrible is that I spilled the beans to a friend of ours, and he surprised him by showing up as Captain Hammer: Sadly, I didn't go trick-or-treating this year. Instead, I wore a Jason mask and hid in the bushes. When someone rang the doorbell, I screamed and chased them. I got to keep most of our candy

"Killing Buggers was not homicide."
"No, I guess it was insecticide."
Top

My adorable niece was a ballerina this year: can't believe she's almost three..

I decided to not go for Arwen specifically--just an elf. It was a lot of work for only wearing that dress one day, but it was good fun.
I used to hate gravity because it would not let me fly. Now I realize it is gravity that lets me stand.

Me as a Beatle from the Sgt. Pepper album. I won best costume at the party I was at, the prize was 75 bucks WOOT!. Not bad for putting it together a couple hours before the party.
Top

worst holiday
Daniel- you know speaking in the third person has proven that your crazy.
Rodney- crazy like a fox
Top

I decided to not go for Arwen specifically--just an elf. It was a lot of work for only wearing that dress one day, but it was good fun.

Wow! you even have an elfish smile.

The Sgt. Pepper costume is awesome, Ed.
So, Lone Star, now you see that evil will always triumph because good is dumb.
Top

Now for the first time on P-Web -- Senior Who pictures!!
By the way, I never mentioned, but to explain one of my props, I am not just a Time Lord, but also a PokÃ©mon Master!
And also featuring -- Elder Who!! (yes, I change my name when I regenerate instead of my face. weird.)

I don't have pictures of Senior Who before my mission. He wore a blue jacket back then.

I have a lot more Elder Who pictures not shown. Somehow he gets the better story lines.
A signature so short, it's
Slim
Top

Well done. This reminds me of some costumes someone I knew in highschool made; but maybe that's just me seeing the shiny material and thinking all dresses look the same, or something.

Slim, your smile is... well, it's big. I don't know how else to describe it. You have a big smile.
Proud member of the Canadian Alliance.

JL and Adam, thank for the congrats. Some of my friends didn't even recognize me. I was just staring at people creepily. Until I talked, then the knew it was me.

Nic: I told you before but...awesome Rikku.

Steph: I love the Jones family.

Shadow: You're the worst holiday ever.

JL: I love the (you) flower and the (Ginny) bee. So cute! But Paul doesn't get any props until he starts posting again.

LilBee: Very nice elf dress. I would have pegged you as Arwen. And who says you can't wear it more than once?
Top

Misa Misa from Deathnote (Much warmer for the nighttime party)